The Brillo Box has been one of the greatest icons of Modernism since Andy Warhol’s exhibition at The Stable Gallery in 1964. In
continuation of Marcel Duchamp’s ready-made concept, which began 40 years earlier, Warhol wanted to expose the art institutions’ self-sufficiency, and therefore he showed copies of the Brillo soap pads next to copies of other staple goods. The Stable Gallery exhibition made philosopher and art critic Arthur Danto write the essay “The Art World”, in which he was the first to claim that when it is no longer possible to tell the difference between an every day object and a work of art then the work of art must contain an element that cannot be intercepted by the senses. Danto described this element as an atmosphere of art theory and art history, which are included in The Art World. In continuation of this statement George Dickie developed a theory of the art institution that describes how everything, which is approved by members of the art world, whether they are artists, art historians, or art critics, is recognized as art.

By going from the general idea that the most important quality in art is the experience or awareness which derives from the meeting between the work of art and the observer, and instead focus on the surrounding approval of The Art World, the work of art is hereby detached from the
qualitative parameters that define it according to traditional aesthetics and theories of art. Thereby, Warhol’s “Brillo Boxes” are characterized as art in contrast to their parallels in the super markets, and with this the theory of the art institution is capable of describing how art possesses an essence even though the objects of art do not share any common expression or content.

According to Danto, Andy Warhol’s Stable Gallery exhibition marked “The End of Art”, saying that it made an end to a narration whose first part was a progressive conquest of visual manifestations centred round the idea of realism and recognition, and the second part came with the photography and reached its end with pop art and Warhol’s ”Brillo Boxes”. The end of the narration of art does not mean,
according to Danto, that there is no “after” which he establishes in his book “After the End of Art. Contemporary Art and the Pale of History”,1997. Danto does not say that the world of art experiences a crisis or disillusion, but instead he claims that art has been set free; art is no longer tied to the great narration and is free to use history as it wishes, and thereby assume any expression or shape.

This means that new hybrids and art forms develop all the time which is also happening on the present art scene. The artists work across the art styles and specific techniques, because they are secondary to the idea, theme, or concept of the work of art.

Nils Viga Hausken’s work “BRILLO BOXES / zoom” is to be seen as one of these newly generated art forms that combine two already existing medias, namely the embroidery and the photography. The idea behind this work is an important element, and the conceptual aesthetics play
on the relations between old and new ways of expression.

The digital photography consists of pixels; small dots that altogether make a picture. The more pixels that are used the more sharpness in the photo, while a reduction in the number of pixels blurs the picture. Nils Viga Hausken’s cross-stitch embroidery is made the same way, because each cross-stitch is to be seen as a pixel. In his work “BRILLO BOX / zoom” Viga Hausken has chosen to reduce the number of pixels to the extent that the motif is blurry and unrecognizable – almost abstract. This zoom means that the motif sharpens when watching it from a distance, and as a consequence the work deals with a kind of floating spaciousness rather than recognition.

A fundamental difference between photo and cross-stitch embroidery is that the embroidery contains oceans of time while the photo is developed almost immediately. Viga Hausken deals with the idea of time on several levels. First of all Viga Hausken uses the new Brillo box, the one you find in super markets today, as a model, instead of the famous one that has been made into an icon, and hereby emphasizing the
ongoing development of the art scene. Second of all the combination of the photo and the cross-stitch embroidery comments on our extreme high-speed time, and tells us that slow and time-consuming medias, e.g. the cross-stitch embroidery, hold both depths and dimensions that
the photo cannot intercept. 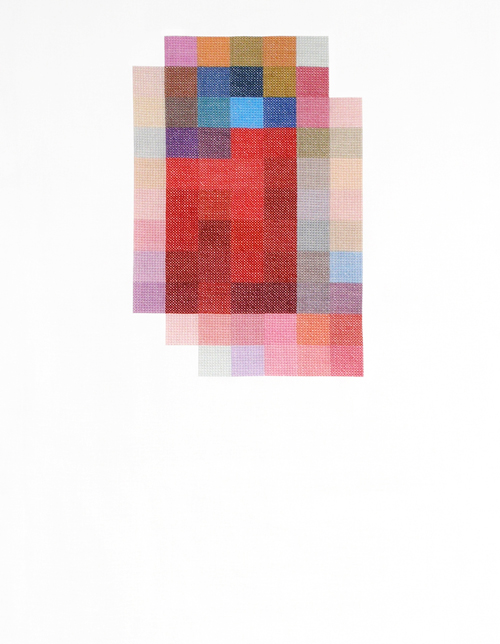 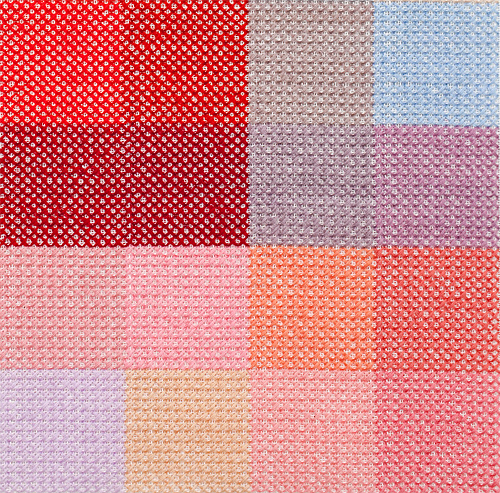 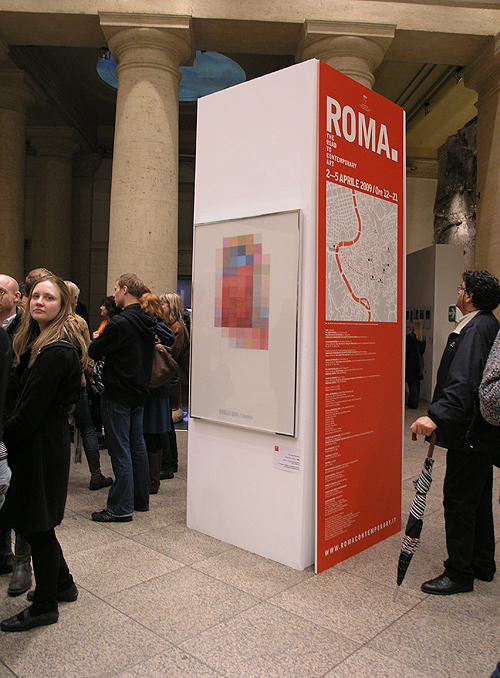 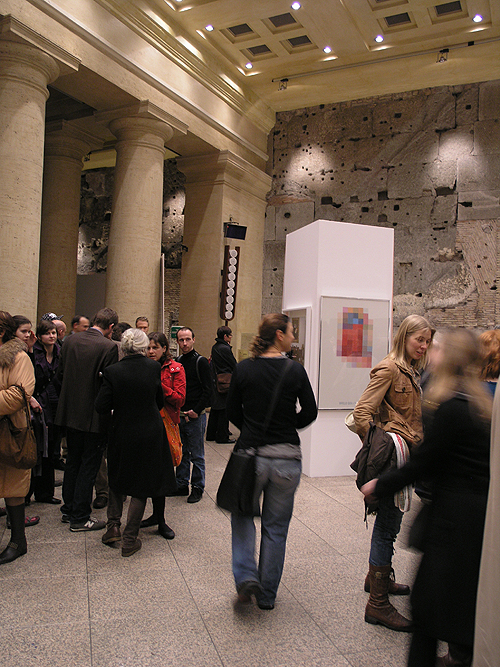